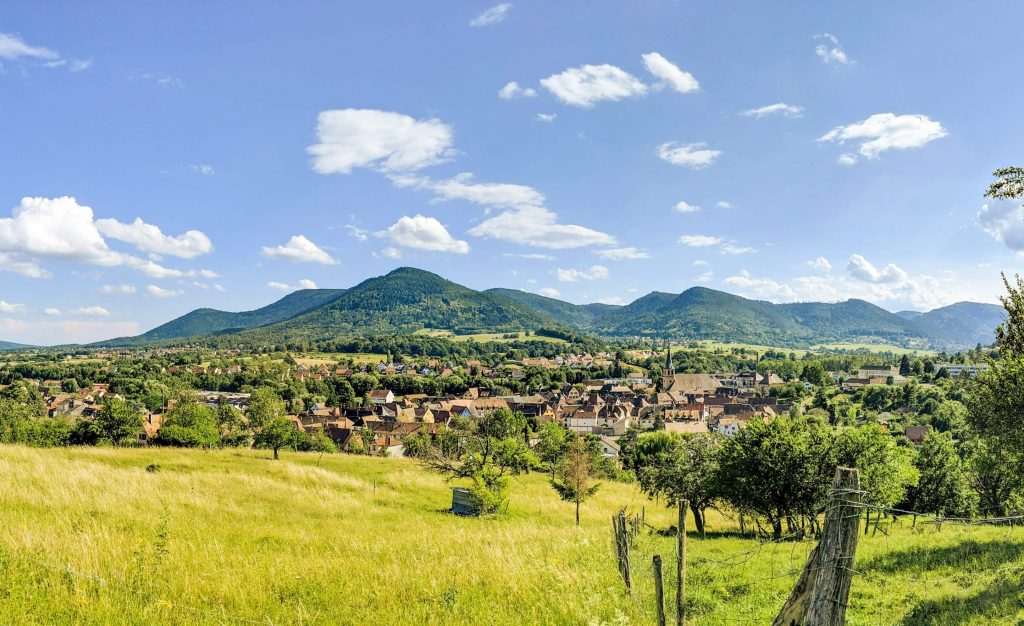 France is the most visited country in the world. In 2019, the nation welcomed a staggering 90 million visitors. It is easy to see why, as there is a wealth of remarkable French holiday destinations.

The EU’s largest country stretches from the Mediterranean, over the Alps, and through a diverse landscape bordered by 8 different countries.

Travelling the length and breadth of France, you pass through a rich diversity of cultures, culinary heritage, and historic sites dating back to prehistory. And that’s before jumping on a plane to explore France’s more exotic overseas départements.

With so much choice, you might be wondering where the French choose to holiday in their homeland. So, we packed our bags, left our passports at home, and picked out six French holiday destinations people in France love to visit.

Every summer, factories and offices across France wind down for les grandes vacances, the big summer break. The shift from city to beach transforms La Vendée during the summer when the population of its sleepy Atlantic beach resorts swell astronomically.

The biggest resort town in the Vendée departement is Les Sables-d’Olonne. Les Sables’ takes its name from its wide sandy beach (sables means sands). A bustling centre with a large harbour, it is known internationally as the start-end point for the Vendée Globe yacht race, which takes place every four years.

But it’s the 18 small resort towns dotted along the 140 km Vendéen coastline that entice holidaymakers. The roads leading into towns like Saint-Jean-de-Monts, Saint Gilles Croix de Vie, and La Tranche sur Mer are lined with campsites.

A seaside escape for city-dwellers and sunseekers, dainty whitewashed cottages are often second-homes. While campsites, typically centred around giant swimming pools and offering a wide choice of leisure activities, are usually full.

The holiday spirit bubbles over in the tightly packed towns as seasonal restaurants fill with beachgoers. Nearly everybody travels by bike (the cycle routes are excellent) or beach buggy, adding to the carefree atmosphere.    Great for surfing, seafood, and doing nothing important, the Vendée coastline is the place to go for traditional French holiday destinations.

The Vendée is merely one example of the many magical locations along the Côte Atlantique (Atlantic coast). Just off the mainland, there are island paradises to be found.

The metropolitan Atlantic islands range from tiny uninhabited rocks to sun-drenched idylls that groan under the weight of summer visitors. Each has its own unique selling points.

The Vikings were first to take their holidays in Noirmoutier, arriving in 799 to pillage the only souvenir shop on the island, the Saint-Philibert de Noirmoutier abbey. They returned a generation later, using the island as a base to raid the mainland.

Fast forward a millennium, and the island was a regular battleground in the La guerre de Vendée (Vendée war). A bloodstained chapter in national history that saw Frenchman pitted against Frenchman in a vicious counter-revolutionary struggle. Infamously, Noirmoutier was the scene of a brutal massacre.

Today, there is little trace of that grim history on Noirmoutier. Instead, this flat, long island with abundant wildlife is a playground for mainlanders. It is a tropical island experience accessible by driving across a bridge. Although you can also risk the tidal causeway, disconcertingly lined with escape towers for misjudged timings.

Further south is Île de Ré, an island in the Charente-Maritime departement overlooking the historic port town of La Rochelle. Connected by a 2.9 km (1.8 mi) bridge, the flat island is lined with dune protected beaches.

Île de Ré is another one of those idyllic French holiday destinations that welcomes the same visitors year after year. Just 17,000 permanent residents are joined by over 200,000 summer visitors. They come for the sunshine, seafood, and pristine beaches. And, of course, to see the famous trouser wearing donkeys (not a typo – it’s a mosquito protection technique).

Completing a trio of islands that collectively form some of the most desirable French holiday destinations is Île d’Oléron. The second largest island in metropolitan France (after Corsica) is known for oyster farming (ostréiculture) and brightly coloured fishing villages filled with seafood restaurants.

Boat trips to nearby Fort Boyard, an arresting Napoleonic sea fort and setting for a long-running tv game show, are always popular.

Few international visitors seem to reach the ever-popular French holiday destinations lying off the western seaboard. Probably because eager residents book all the accommodation long before anyone else can.

During the holiday season — and weeks bookended by jours fériés, public holidays — news crews and beleaguered drivers complain about chassé-croisé. Literally translated as ‘crossover’, it describes the phenomenon of holidaymakers heading in opposite directions: sun starved travellers head south, while southerners head north to dodge tourists and sweltering summer temperatures.

Bretagne (Brittany) is not a tourist secret. British visitors especially love all the French holiday destinations in this region. But one department in the far northwest seems to hold a special place in French hearts, Finistère.

Windswept, craggy, and picturesque, it is a world apart from the Côte d’Azur at the opposite end of the L‘Hexagone.

Finistère is the epicentre of Breton culture, giving it a unique character. It is also home to Locronan, a perennial contender in the Les plus beaux villages de France annual competition and a destination that features on many ‘must-visit’ lists.

Preserving the language and culture of this once fiercely independent Celtic region, Finistère is like visiting a forgotten corner of the republic. It is one of the most tranquil French holiday destinations.

Rocky outcrops, weatherworn lighthouses and medieval towns like Concarneau add to the charm. While the timeless Breton city Quimper provides a focal point for gourmet dining and culture seekers.

Other parts of Brittany, especially towns like St Malo, may be better known French holiday destinations amongst international travellers. Yet Finistère offers a timeless escape that can even trick French visitors into thinking they’ve crossed the border into a different country.

Some prime French holiday destinations are located far from metropolitan France. Overseas departments are found across the Caribbean, Indian Ocean, and South America. But a little closer to home is the increasingly in-demand Corsica (Corse).

The birthplace of Napoleon Bonaparte and scene of one of Asterix’s most memorable adventures, Corsica is a pretty Mediterranean island with some of the most gorgeous beaches in France.

Unlike her other overseas departments, Corsica is technically part of metropolitan France. Yet, as Napoleon recognised, it can feel like a different country.

Among the chief attractions are historic citadel towns, crystal clear dive spots, scenic mountain trails and, of course, the chance to explore Maison Bonaparte, the home of France’s first emperor.

Closer to Italy than France, Corsica is another of those French holiday destinations that feels both foreign and familiar, which is one of the reasons mainlanders love it so much.

Underlining the sheer wealth of French holiday destinations, France is blessed with two mountain ranges. And while the Alps may take the prize as the best ski destination, the Pyrenees National Park edges in front as a summer destination.

The Pyrenees are less developed and accessible to visitors than its rival, giving it a wilder feel. Summer or winter, the mountains of Occitanie are among the most breathtaking French holiday destinations.

Straddling the borders of France and Spain, the Pyrenees have UNESCO World Heritage status for a reason. In summer, it is nirvana for hikers, mountain bikers, nature lovers, and extreme sports enthusiasts.

The culturally rich landscape is dotted with thermal spas and photogenic castles. It is also home to historic Lourdes, a site of miracles and still a place of Christian pilgrimage.

The ultimate escape from everyday life, for many in France the Pyrenees is one of the most underappreciated French holiday destinations.

Wrapping up our list of French holiday destinations, we head east to the charming Alsace region.

Historically contentious, Alsace fuses French and German culture and offers some of the most singular cultural experiences in France.

At the heart of the region is the charming city of Strasbourg, where the European Parliament sit. Its Christmas market holds an almost mythical status in France, although the region’s largest city is a joy to visit any time of the year.

Outside the festive season, visitors arrive to marvel at the atmospheric old town on La Grand Île (The Large Island) and uncover the stories of this historically significant city.

The wider Grand Est administrative region, including Champagne-Ardenne and Lorraine, is bordered by four countries and dissected by major rivers, including the Rhine. Cross-border influences give the mountainous region a distinct character and ready opportunities for international exploration.

One of the biggest draws is the vignobles, vineyards. Champagne may be the big name, but oenophiles love the Alsace wine route, France’s oldest. The diverse terrain produces many notable Grand Cru wines from aromatic grapes like Riesling and Gewurztraminer.

If you love wine, you might like our guide to ‘9 Of The Finest Wineries In France You Can Visit In 2022’, which includes a biodynamic, natural vineyard along the venerable Alsace wine route.

For many in France, food and wine are the cornerstone of a great holiday at home. Which explains why the Alsace region ranks as one of the French holiday destinations that people in France adore. 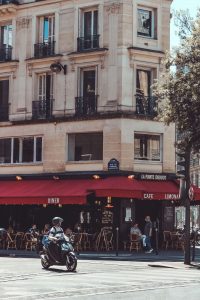 History records the first restaurant opening in Paris in 1765. It was not the first place to sell food, but it was the first time 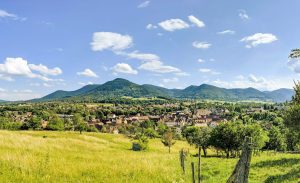 France is the most visited country in the world. In 2019, the nation welcomed a staggering 90 million visitors. It is easy to see why,