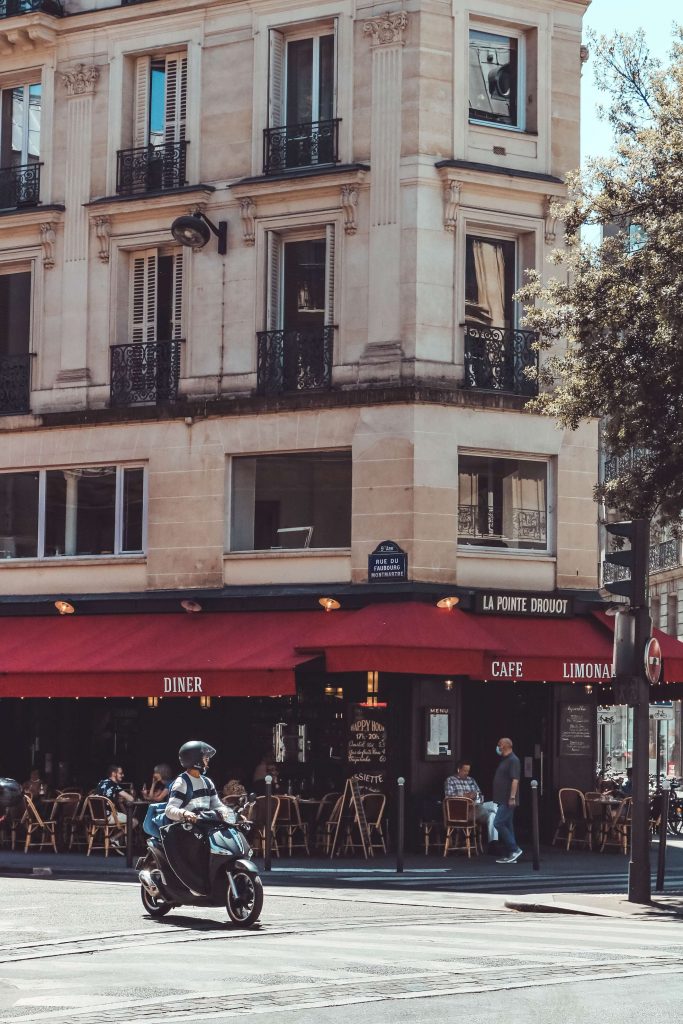 History records the first restaurant opening in Paris in 1765. It was not the first place to sell food, but it was the first time the word entered the global lexicon. Today, the word belongs to the world and is liberally used to describe anywhere that serves food. Yet, when dining in France, you will notice several types of restaurants and may wonder what the differences are.

Restaurant or brasserie, café or bistro, the differences can be subtle. With such long and rich culinary traditions, many of the terms have taken on new meanings over time. We are going to look at all the different types of French restaurants you can find when dining in France.

The origins of the word restaurant

Whether you eat in a brasserie or bistro, there is a good chance you’ll simply hear them called restaurants when dining in France. Yet a restaurant has a specific meaning, indicating an establishment that only opens for lunch and dinner. Intriguingly, it once even described the type of food on offer.

The word restaurant originally described a place to find bouillons restaurants, restorative broths. Striking a blow against nominative determinism, legend tells of an entrepreneur called Boulanger (Baker) who started selling a broth par excellence in 1765. Kickstarting an early food trend, his success was replicated across Paris as citizens found a passion for dining in France.

Question marks hang over this precise version of events, not least because the first record of the story did not appear until a century later. Some credit La Grande Taverne de Londres as the first ‘true’ restaurant. Opened in 1782, it served a varied menu in comfortable surroundings. What is not in doubt is the French origins of the word restaurant and that dining in France quickly became a popular pastime in the 18th century.

One headscratcher when dining in France is choosing between several apparently different types of eateries. The differences go beyond what food is served.

Bistros, brasseries, and cafés all started life as places to grab a drink, possibly with a bite to eat. In short, they share many traits. Yet there are a few consistent ways to tell them apart when dining in France.

A café may not be your first choice when dining in France, even though food is usually on the menu. However, it is still the least ambiguous venue to classify.

It’s all in the name: a café is a place to drink coffee (café). The first cafés in Paris opened in the late 1600s and quickly multiplied as the exotic drink delighted high society.

Cafés are still the place to stop for a brew or any other beverage you fancy. Strictly speaking, a café is not a restaurant. But much like the emergence of gastropubs across the channel, many cafés serve food. Expect a safe menu of simple French dishes like a croque monsieur or quiche and salad.

Often at the heart of local communities, cafés are relaxed environments that welcome patrons who want to drink and dash or linger over a carafe of wine.

But the definition of café is flexible, and naming conventions are non-existent. Many bistros and brasseries have the word café in their name, often reflecting the establishment’s heritage.

Café Procope in Paris, for example, claims to be the oldest café in France. Opened by Italian Francesco Procopio Dei Coltelli in 1686 and still open today, the café is famed for the literary greats who once frequented the establishment. Today, Café Procope is a high-end brasserie.

If you want to save a few Euros to spend on some fine dining in France, check out our guide to ‘21 free things to do in Paris’.

Other venues serving drinks include bars (dedicated solely to drinking and often doubling as a Tabac, tobacconist), contemporary coffee shops, and salon de thés. Salon de thés were particularly popular in the 19th century and were once considered a refuge from boisterous cafés. They remain alcohol-free spaces where tea is always on top of the menu.

A bistro bridges the gap between café and restaurant. A bistro was originally a café that served a small menu of homemade dishes. Typically family-run, they were considered a place where the working class could find homecooked, affordable meals.

One story claims the word is derived from the Russian word for quicker, “býstro“. After Paris was occupied by Russia in 1812, following Napoleon’s disastrous Russian campaign, frustrations with the leisurely service in cafés would prompt cries of “býstro”.

With the emergence of the ‘bistronomy’ movement in the 1990s, many bistros shed their image as places to find inexpensive and homely meals. Often housed in attractive, characterful buildings and attracting ambitious chefs and accomplished cuisiniers, bistros are now the first choice for many when dining in France.

Bistros follow typical restaurant opening hours, meaning they only open for a few hours at lunchtime and evenings. The menu can include anything from classic French dishes to inventive and innovative cuisine. The menus are usually short, and there is a good chance the food is locally sourced. When dining in France, look out for the menu du jour (menu of the day), which usually offers the best value.

Brasserie means brewery in French. It also described inns that brewed their own beer and served food. The word has been reclaimed in recent years by artisanal beer makers, although is still commonly associated with a particular style of French restaurant.

Spacious, informal, and serving a long menu of French classics, brasseries tend to open at all hours, making them a go-to choice for dining in France at unconventional hours.

The extended opening hours and diverse menus are the primary characteristics of a brasserie. Patrons can also expect brisk and professional service. Due to their size, reservations are not usually required.

One further thing that distinguishes a brasserie is the décor, which tends to be bright and open-plan, often with lots of marble and mirrors. Maybe even some brass, which is merely a coincidence.

You can safely assume that most town centres will have a brasserie, especially near central squares. You can also count upon finding favourites like steak frites or salade Niçoise alongside more creative dishes.

As has probably become clear by now, there are no clear rules when describing restaurants in France. A brasserie could be an Italian-inspired eatery or an uninspired tourist restaurant. The key is that it will usually be open all day and have plenty of seating, which is why they are so popular with tourists dining in France.

What about other types of restaurants in France?

Unlike a bistro or café, a restaurant is solely in the business of selling food. The term can broadly apply to anywhere you can eat. Although in France, it more accurately describes somewhere that opens for limited hours and makes the menu the star of the show.

French restaurants can encompass everything from cheap and cheerful to haute-cuisine temples with a Michelin star or two.

At expensive restaurants, diners can expect silver service and an exquisitely executed menu in sophisticated surroundings. Venues like this thrive on their reputation, which means they can often be found in off-grid locations that people don’t mind journeying to.

At the other end of the scale sits chain restaurants, typically found around the edges of towns and neighbourhoods.

Whether you find yourself dining in France at a Mcdonald’s or a Michelin-starred venue, you are still eating in a restaurant. And none of them will be serving ‘renewing’ broths.

A few other restaurant terms to look out for in France

Travelling around France, you will probably see signs for other types of French restaurants. Here are a few pointers to help you get the most out of dining in France.

If you see grand restaurant on the sign when dining in France, it might be time to extend your overdraft. Grand does not indicate size, but quality (and final credit card bill). Expect haute-cuisine in refined surroundings, with service and a wine list to match.

Emporter means “to carry” in French. In an age of home delivery, and in response to the Covid pandemic, many traditional restaurants now offer à emporter, takeout.

Found in quiet villages and along busy routes, an auberge was traditionally an inn that provided food and lodgings. Often located in old, atmospheric buildings, these venerable French restaurants have existed for centuries. Once providing stables and lodgings, today they tend to be homely bistro-like places to break up a long journey. Some are even higher-end establishments worth making a journey exclusively for.

You may see the word relais on restaurant signs. Meaning relay, relais once described a spot where long-distance travellers exchanged or refreshed tired horses. There would usually be an auberge on hand.

Although many relais points have been swallowed by urban spread, they may still serve food in the same building. Hence the popularity of the name for restaurants all over France. Not to be confused with the chain of relais routiers, which started life as truck stops, even if today they welcome more tourists than truckers.

Dining in France does not always involve table service. A restaurant à volonté is an all-you-can-eat establishment. Often reserved for international foods, a buffet volonté is self-service.

France may be slow to adopt global food trends, but the food truck revolution was not one of them. From crêpes sellers at local events to pizza vans that appear in villages once a week, food trucks have gone from faddish import to a popular part of France’s culinary landscape.

Hopefully, this guide to restaurants in France has illustrated that dining in France is an experience wherever you go.

If you’ve searched up festivals in Spain, you might have come across people covered in tomato, and having fun. This is the festival of La